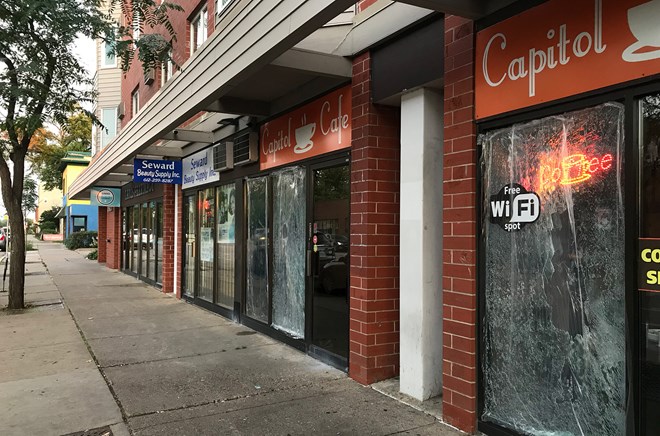 A surveillance video from the vandalized stores shows a man wearing a black tank top throwing rocks at the glass doors of East African-owned stores in Minneapolis.

A surveillance video from one of the vandalized stores shows a man wearing a black tank top throwing rocks at the glass windows of $5 Dollar Pizza at Franklin Avenue and 2nd Avenue South.

“He did not come here to steal. The motive of the guy was to cause harm,” said Bashir Egal, who owns the pizza store.

The store’s glass windows were damaged, and Bashir estimates it would cost about $5,000 to fix them.

About 30 minutes later, the same man is seen on a surveillance video throwing rocks at the glass windows of Seward Market & Halal Meat at Franklin Avenue and 25th Avenue South, about two miles east of $5 Dollar Pizza.

“We’re very worried,” said Shamsudin Hassan, who owns a grocery store nearby. “This is the biggest East African-owned [collection of stores]. This is our shopping center. We don’t feel safe.”

The halal market’s doors and windows were not damaged.

But Abdirahman Awad wasn’t so lucky. His business, Capitol Cafe, appeared to have the most extensive damage.

When he arrived at the cafe Wednesday around 7 a.m., Abdirahman noticed shards of glass on the pavement. He looked up and saw two of the cafe’s glass windows were broken.

“I was shocked,” he said. “It looked like a car accident.”

Word of the vandalism quickly spread in the East African community, who are mostly Oromos and Somalis.

Abdirahman said customers were afraid to come to the cafe and he lost half of his business for the day. A typically buzzing cafe was almost empty when a Sahan Journal reporter visited the cafe on Wednesday evening.

Abdirahman said it would cost about $6,000 to fix both windows. With only plastic covering the windows, he’s afraid someone might steal everything in the cafe if they’re not fixed soon.

“The scariest thing is, what should I do tonight?” Abdirahman said.

Mustafa Ibro works at Barber & Braiding adjacent to Capital Cafe, and said he’s worried something worse might happen next time.

“We’re the lucky ones,” he said, because the barbershop did not sustain any damage. “This hateful thing that’s going on is dangerous.”

Samiya Mohammed, one of the owners of Tobacco Plus which was slightly damaged, said this wasn’t the first time her business was vandalized.

She installed metal bars behind the glass windows after her store was broken into three other times in the last two years.

“We don’t know who’s doing this,” Samiya said. “I don’t know what they are trying to get out of it. They inconvenience us. They cost us money.