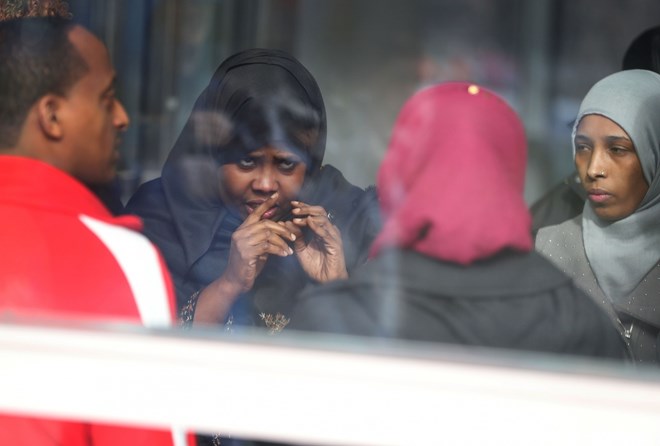 A Minnesota woman who sent money to the militant group al-Shabab in Somalia was sentenced to five years’ probation on Wednesday after she cooperated with prosecutors, who said the light sentence would send a message to community members who shunned the woman yet supported other defendants who remained defiant.

Amina Mohamud Esse, 43, pleaded guilty in 2014 to one count of conspiracy to provide material support to a foreign terrorist organization. She faced up to 15 years in prison, but prosecutors sought probation because she provided substantial assistance to the government.

“I accept responsibility for what I did,” Esse told the judge through an interpreter. “I’m willing to do all I can for the rest of my life to correct the mistakes I did.”

Her cooperation included nearly 60 meetings and phone calls with authorities, as well as testimony in the trial against ringleaders of an online network of women who used an internet chat room to raise thousands of dollars for al-Shabab, which the U.S. says is involved in terrorism.

Assistant U.S. Attorney Charles Kovats said Esse was the 21st person to be sentenced in terrorism cases in Minnesota in the last five years. The sentences have ranged from probation to 35 years in prison.

Kovats noted Esse’s case is the first in which his office has recommended probation, saying it would send a message that “working with the U.S. is the right thing to do, even when the loudest community voices don’t seem to agree.”
Minnesota is home to the largest Somali population in the United States. More than 20 young men have left the state since 2007 to join al-Shabab in Somalia, and roughly a dozen people have left in recent years to join militants in Syria.

Many members of the local Somali community have condemned terror recruiting over the years, and have urged cooperation with the government. Several community groups have been working hard to help at-risk youth before they are lured by terror propaganda.

Still, Kovats said Minnesota has a problem with terrorism. He said Esse has been ostracized by the Somali community since she began cooperating – while defendants who remained defiant were placed on pedestals. He showed video of community members who spoke in support of those defendants, including video of a man who said one defendant deserved a Nobel prize.

Kovats also pointed to fliers for fundraisers that were held to raise money for families of defendants who got the highest penalties. Hearings for other defendants have drawn dozens of supporters, but just one community member – an uncle – attended Esse’s sentencing.

“Look who’s here today,” Kovats said, pointing to the gallery. “Look at the community support for the defendant who did everything right … there is no one here.”

Kassim Busuri, a Somali youth activist listed as a contact for one of the fundraisers, said the families of other defendants were struggling after spending all of their money to defend their sons.

“We saw their struggle,” he said. “We run community centers, we run mosques, we run organizations, and when families come to us in times of need we will help them.”

He said Esse never reached out to his organization, and he hadn’t heard about her case.

Esse’s attorney, Robert Sicoli, also asked for probation, saying Esse lived a tragic life and suffered abuse. Sicoli said she made the payments to al-Shabab – a total of $850 in six installments – at the behest of her controlling husband, an al-Shabab supporter.

U.S. District Judge Michael Davis said a false narrative in the Somali community that holds up those who support terror groups as celebrities or humanitarians is a “fake news flashpoint.”

Davis, who has handled all of Minnesota’s terror cases, said he would stand behind Esse, who is a refugee, while she’s on probation.

“The court is on your side, and I will do everything within my constitutional power to keep you here,” he said.

The women Esse testified against in Virginia have been sentenced to prison for their role in raising money for al-Shabab. Muna Osman Jama, 36, of Reston, Virginia, received 12 years and Hinda Osman Dhirane, 46, of Kent, Washington, was sentenced to 11