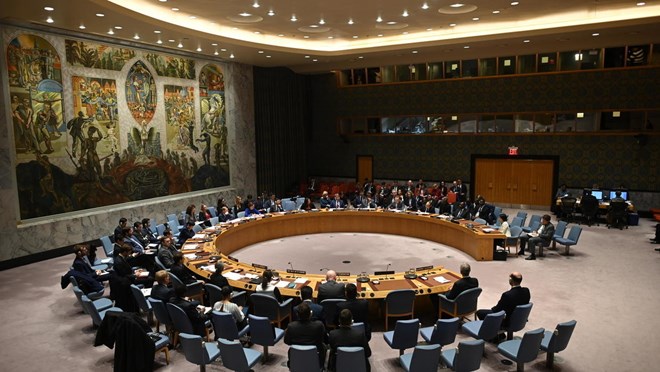 UNITED NATIONS: The UN Security Council, which has not met for 12 days due to the coronavirus outbreak, is deeply divided over a proposed declaration on the crisis and holding “virtual” meetings to vote on resolutions, diplomatic sources said Monday (Mar 23).

The impasse comes as world leaders struggle to respond to the pandemic, with rivals US and China engaged in a war of words as medical experts plead for unified action.

The draft proposal, drawn up late last week by Estonia, highlights “growing concern about the unprecedented extent of the COVID-19 outbreak in the world, which may constitute a threat to international peace and security.”

It also calls for “full transparency” over the outbreak — wording seen by some to allude to US criticism of government secrecy in China, where the virus first emerged.

“The members of the Security Council urge the member states to put more emphasis on helping the ones most exposed and vulnerable to the virus and the populations in dire humanitarian situations,” the draft, seen by AFP, says.

It adds that “no country can succeed alone.”

A UN Security Council declaration requires the support of all 15 members to be adopted and published.

World Health Organization chief Tedros Adhanom Ghebreyesus warned on Monday that the pandemic was clearly “accelerating” as the number of deaths surged close to 16,000, with over 350,000 declared infections.

The Security Council, chaired in March by China, has not met since March 12, with most UN staff and diplomats from the national missions working from home to avoid infection, though the New York headquarters remains open.

On Thursday it must renew the mandate of UN experts responsible for sanctions imposed on North Korea for one year and extend the peace mission in Somalia for one year.

According to diplomats, the council must also extend the peacekeepers’ mission in Darfur by two months, without modifying the numbers of troops.

Originally, the Security Council was supposed to decide on a gradual withdrawal to create at the end of October a political mission in Sudan and close its peacekeeping operation in Darfur.

Council meetings on Syria and Libya this week have been canceled, but it remains unclear whether the council will meet as scheduled on Thursday.

Critics point out that a “physical” session would force around 50 people to come to the UN, with one diplomat describing the Russian stance as “idiotic.”

“We are for a physical presence (and) doubt that (voting) could be achieved otherwise,” Russian deputy ambassador to the UN Dmitri Polyanskiy told AFP.

Ships Positioned on Somalia’s Coast for US Troops’ Drawdown